Ajanta and Ellora Caves in a glance

Ajanta and Ellora caves are considered to be one of the most important tourist destinations in the world owing to the magnificent paintings of Ajanta and well the carved sculptures of Ellora. Many of the cavings in these caves date back to 200 BC. One can find many things to do near Pune over a weekend trip, which include sight-seeing, museum tours, fun-digging/excavating, etc. The distance from Pune to Ajanta and Ellora caves is 289 km and is a perfect place to visit near Pune with a lot of things to do over a weekend trip.

How to reach Ajanta and Ellora caves

Jalgaon and Aurangabad railway junctions are the two railway stations that are located near Ajanta and Ellora caves.

Ajanta Caves are connected to a network of excellent roadways with Mumbai, Pune, Ahmednagar and many other cities.

Places to Visit in and around Ajanta and Ellora Caves 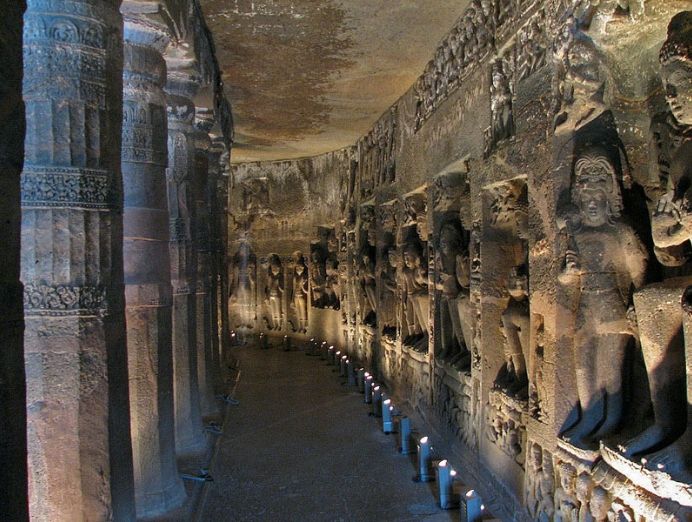 Located around 100 km from the town of Aurangabad, Ajanta Caves are now included in the list of UNESCO World Heritage Sites. There are about 30 rock-cut Buddhist monuments in these caves. The region around these caves was once heavily forested. Dignaga- a celebrated Buddhist philosopher lived in these caves in the 5th Century AD. Many paintings, cave engravings of different periods still exist. These historical paintings and rich backstory – make this place a perfect place to visit near Pune. 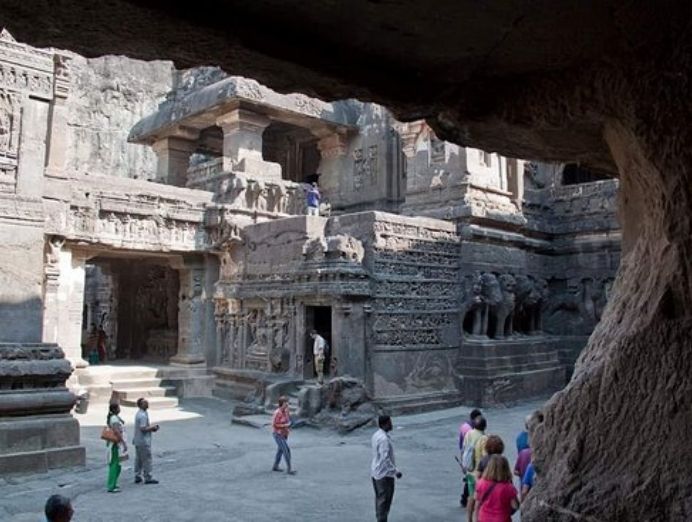 The marvelous caves of Aurangabad are tucked between the Satara and Sihyachal range of hills in Aurangabad. These comprise 12 artificial Buddhist caves, which were dug during 7th century AD. It is a protected site under the Archaeological Survey of India. These caves are often said to be the missing link between the Ajanta and Ellora caves. Many historians visit this place near Pune for the above reason.

Aurangabad is famous for shopping and is a place to visit to buy Himroo shawls, Paithani sarees, or fabric like Mashru and Kimkhab. The streets are always buzzing with visitors from across the world. 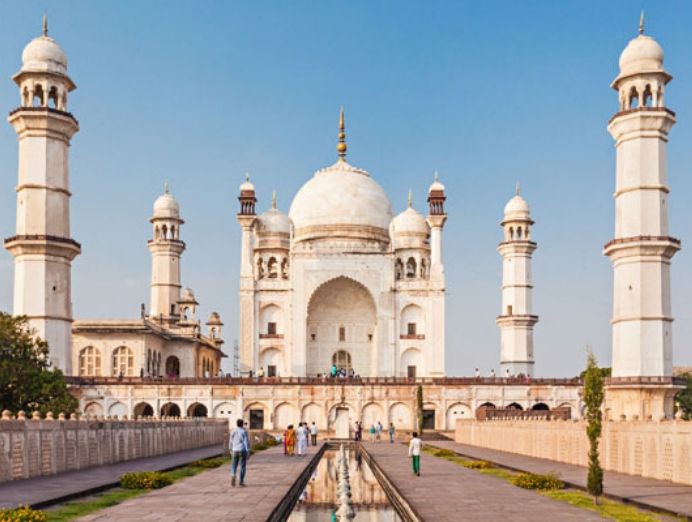 Known as Dakkhani Taj (Taj of Deccan), Bibi Ka Maqbara is situated about 5 km from Aurangabad city. It was built by Azam Shah- son of Aurangazeb, in memory of his mother. This monument bears a striking resemblance to the Taj Mahal. 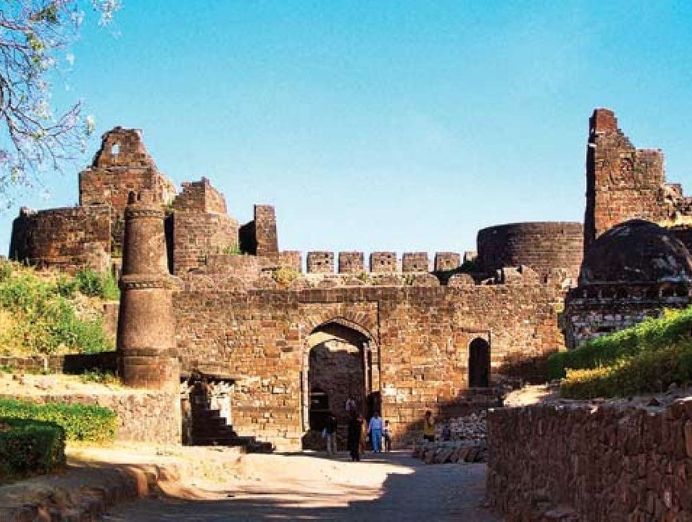 Daulatabad Fort (14 kilometer away from Aurangabad City), in Daulatabad, or ‘the abode of wealth’ is situated on an isolated conical hill from a 600 feet high mesa-like flat terrain. The name was given by Mohammad Tughlaq- sultan of Delhi. It was constructed in the 12th century by the Yadav clan. Daulatabad Fort is one of the world’s best preserved forts. A series of secret, puzzled tunnels and pathways lie amidst the tower. This fort also served as the capital hold under Mohammad Tughlaq for many years. This could be a perfect spot to visit during weekends, for those who seek knowledge coupled with excitement. Grishneshwar is an ancient pilgrimage site where one of the twelve Jyotirlinga manifestations of Lord Shiva is found.It is located at a distance of around half a kilometer from Ellora and 11 km from Daulatabad near Aurangabad in Maharashtra. The original temple is believed to be a pre-historic one, which was later restored in 18th century AD. There is also an interesting story associated with the Shivling of this temple. 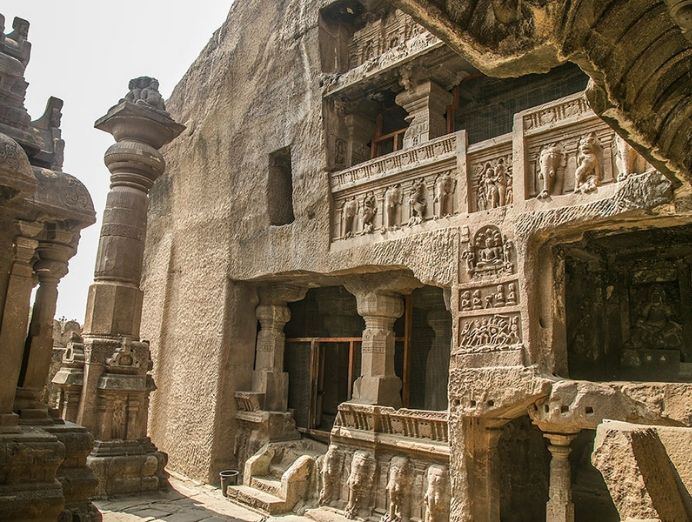 There are in total 5 Jain caves at Ellora and they are dated to the ninth and tenth century AD. These are a part of UNESCO World heritage site.

Kailasanatha and other temples- Ellora

While Ajanta and Ellora caves are known as the world famous Buddhist monuments, they are a testimony to the fact that the three religions Hinduism, Jainism and Buddhism were one and hence there are also Hindu temples to visit near to Pune. 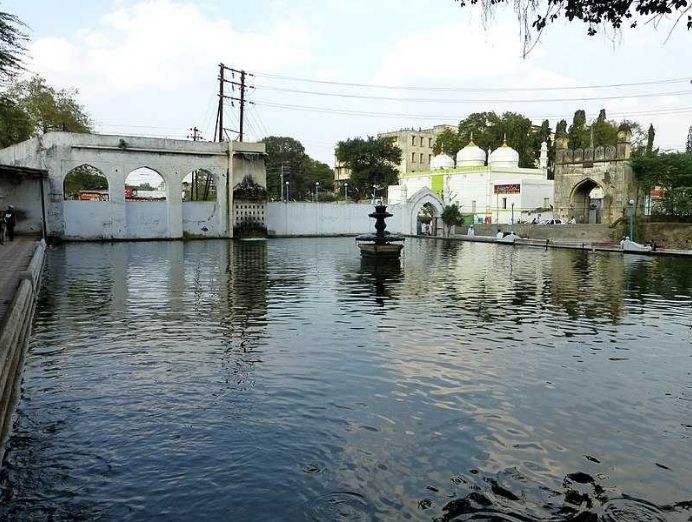 Built about 1700, this is a water mill used for grinding grains. The forethought put into the marvel of architecture is truly amazing. This monument displays the usage of technology by the medieval people of India. It is used to generate energy via water brought down from a spring. This place is beautiful, with gardens, banyan trees, fountains and cool chambers to visit near Pune.

Shopping in Ajanta and Ellora

Shopping near Ajanta and Ellora caves is a must to do thing in your list, the place is fascinating as the region is rich in the art and culture of several communities. One can find Bidri at objects with silver inlay, Buddhist sculptures, semi precious stones and some artifacts in the local shops. Shopping here is indeed an exciting activity to do near Pune for the history lovers. 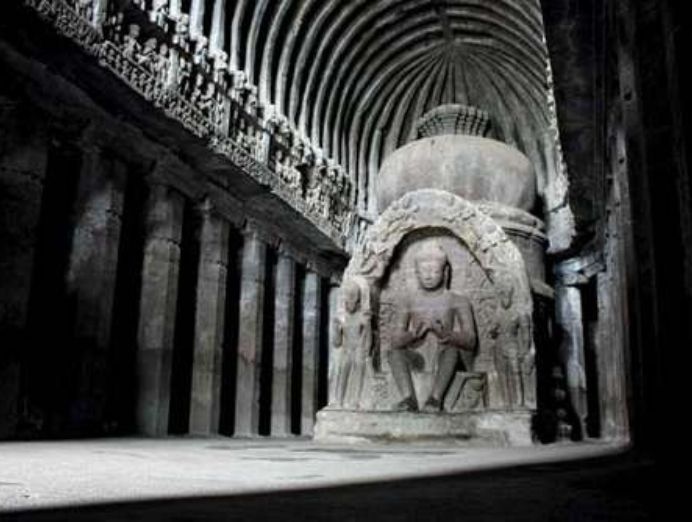 There are 12 Buddhist caves in the Ellora cluster to visit, which date back to 6th century AD. One can find many monuments and sculptures there.

Apart from the magnificent caves that exhibit the best of Buddhist religious art the shopping plaza is another major tourist attraction in Ajanta.

What to eat in Ajanta and Ellora Caves :

The cuisine of Aurangabad exudes the flavor of North India and Hyderabadi cuisine as the city of Aurangabad was ruled by the Mughals and the Nizams. Those who love to gorge on delightful dishes can eat to their heart’s content and take back the memories and aroma of famous flavored Nawabi biryani or the aromatic pulao as a thing to do in this place near Pune. Being a Muslim predominated area, this place is a food lover’s delight, especially for non-vegetarians. Kebabs are another specialty.