Bodh Gaya at a glance:

How to reach Bodh Gaya:

By Air: The nearest airport is Gaya airport, which is approximately 17 kilometres from Both Gaya. Cabs are readily available from the airport to Bodh Gaya.

By Rail: The nearest railway station is the Gaya Junction, which is at a distance of 13 kilometres from Bodh Gaya. It is well-connected to major cities of India. Local taxi is available from the station to Bodh Gaya.

By Road: Many taxi operators provide cab services to Gaya. Gaya is just 3 hours away from Patna but the road connecting to Gaya is quite rough. Bihar State Tourism Corporation runs bus services from nearby towns and cities to Bodh Gaya.

Things to do in Bodh Gaya

Referred to be the world’s most sacred Buddhist pilgrimage centre, Bodh Gaya is the place where Gautama Buddha achieved Enlightenment. Home to a UNESCO world heritage site, Bodh Gaya is particularly famous among Buddhists. Located at a distance of 100kms from Patna, this place to visit is a perfect option along with a number of things to do for an enlightening weekend visit.

Places to visit in and around Bodh Gaya: 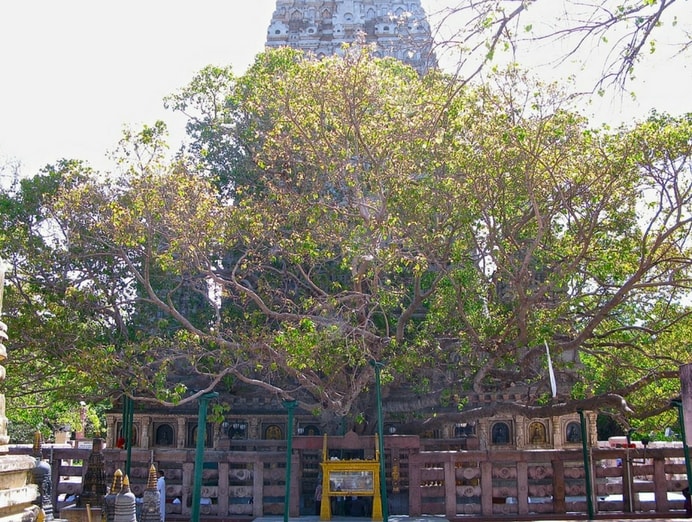 Bodhi Tree is the tree that Lord Buddha meditated under before he could attain enlightenment. The original Bodhi tree may have been destroyed by many Kings, but the direct descendants flourish even today standing tall at 80 feet. 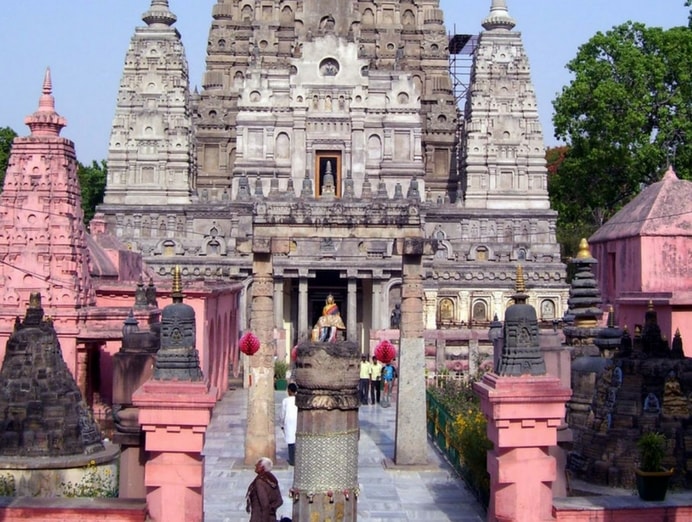 Devotees who wish to visit this temple must go through a grueling climb of 424 stone steps to reach the top of the hill, atop which lies this temple. On the hill where this temple is located, there are two caves, namely, Brahmayoni and Matreyoni along with an ancient temple of Ashtabhuja Devi. 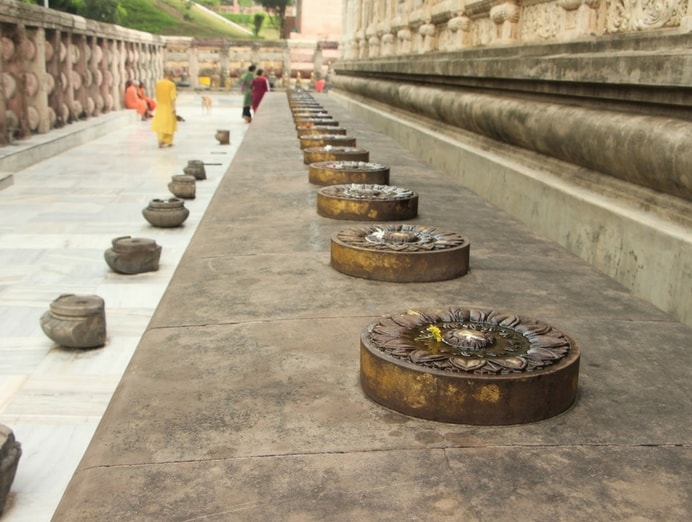 Situated along the Bodhi Temple, Cankamana is a holy shrine featuring a carving of Lord Buddha’s feet into the black stone lotuses. There are pathways along with the location that were said to be utilised by Lord Buddha during the third week of enlightenment. This is one of the most important places of Buddhist shrines to visit. 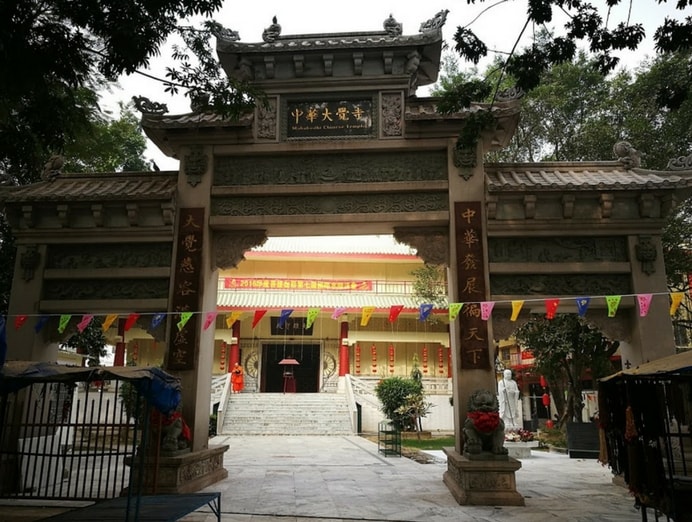 Chinese Temple was constructed by Buddhist monks. It displays beautiful Chinese artwork with a statue of Lord Buddha within the sanctum. 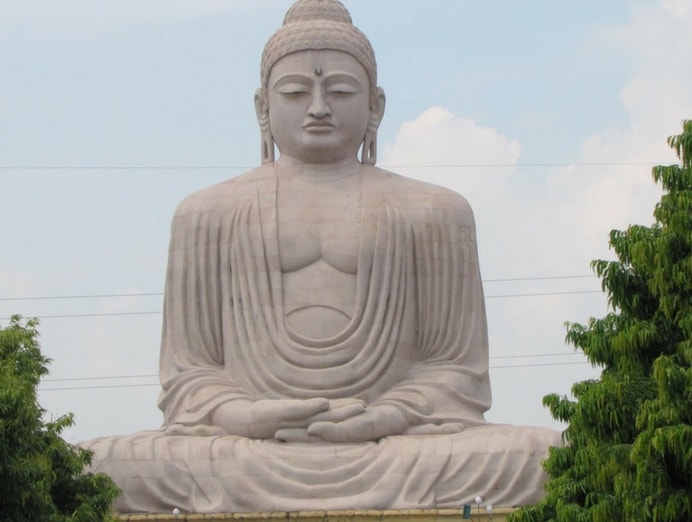 This statue of Lord Buddha is the tallest in India and it was instated by the XIV Dalai Lama in 1989. It is a meditating Buddha resting on a giant lotus, constructed using intricately carved sandstone and red granite. 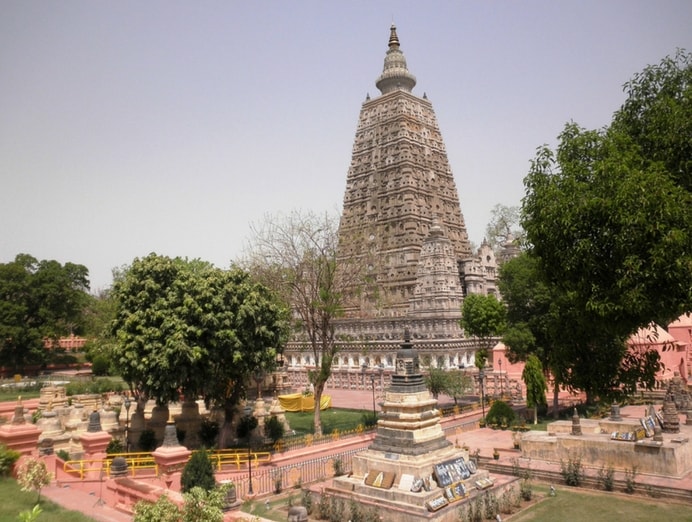 An outstanding example of Buddhist culture and Japanese architecture, this temple was built in 1972 with the help of International Buddhist communities. Located at a distance of 15 km from the city centre, the temple is beautifully carved out of wood. This temple has many beautiful paintings of Buddha’s life. This site is a must visit. 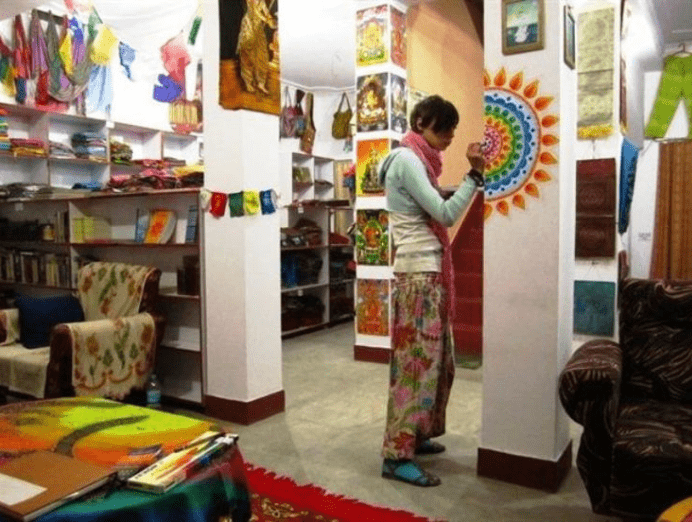 Kundan Bazaar is an ideal place to visit for those looking for souvenirs, books and other handicrafts of the region. This place to visit is highly popular across whole of India. This is indeed a popular tourist spot! 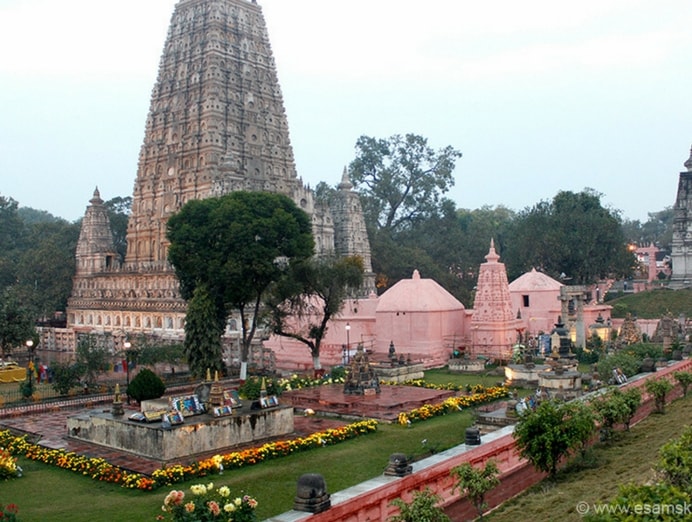 The Mahabodhi Temple serves to be the main and most important attraction in Bodh Gaya. It was built in the 7th century, surrounding the Bodhi Tree that Buddha sat under whilst he attained enlightenment. 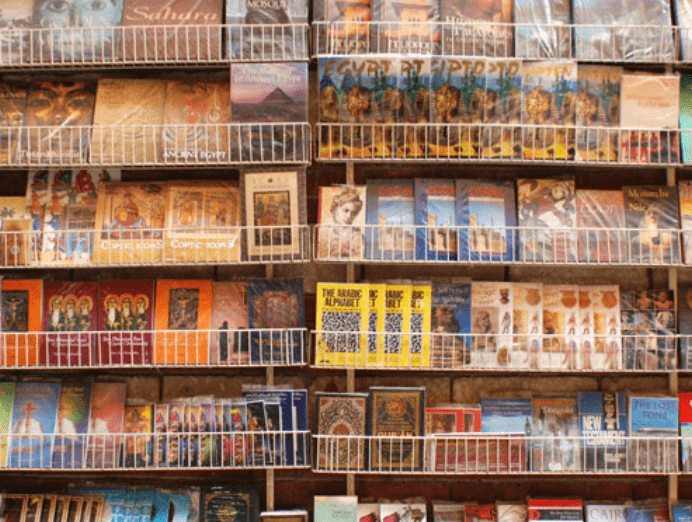 This book store offers a wide range of collection of Buddhist books, books on Buddhist culture and history of Mahabodhi Temple. It is a must visit the place to know it all regarding Buddhism. 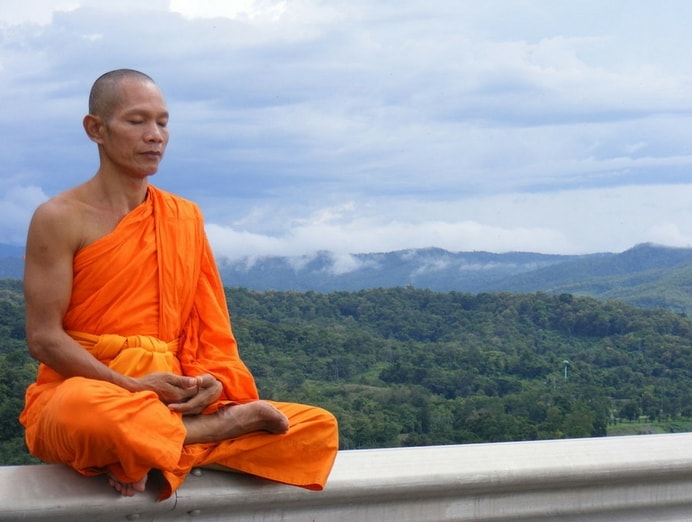 That’s the essential thing that one should try while in Bodh Gaya. Even if you are not a Buddhist, meditation and absorbing the vibes here can be very soothing and pleasing. 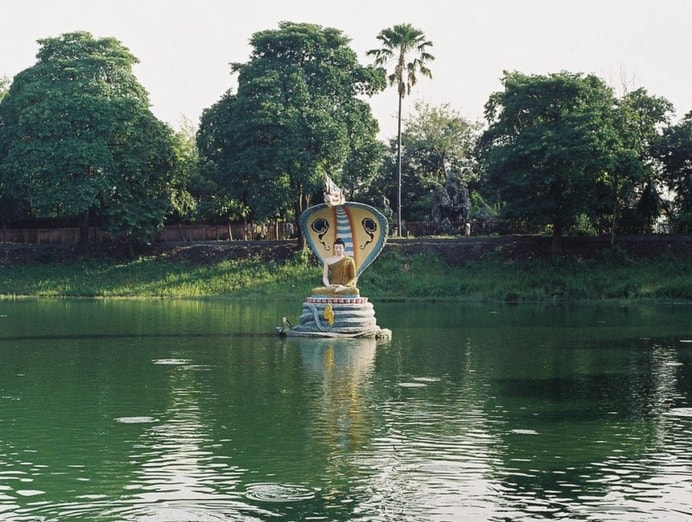 A popular site to visit at Bodh Gaya, the Muchalinda Lake is located next to the main temple. It is associated with a mythological tale stating that Lord Buddha was protected from the storm by Snake King Muchalinda. 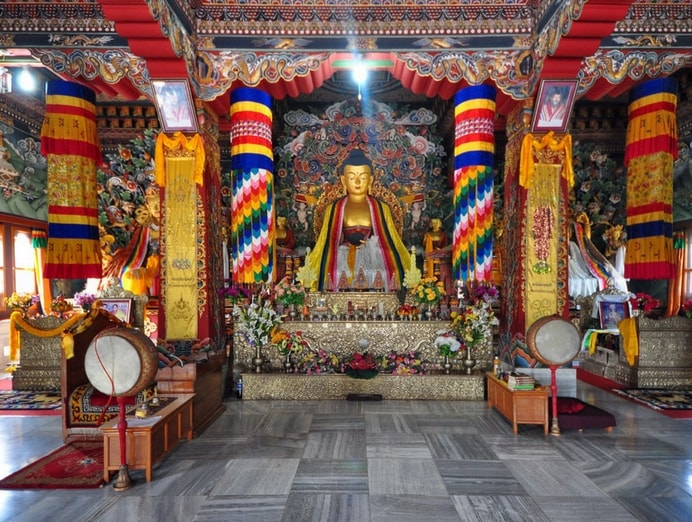 The Royal Bhutan Monastery has been named so, as it was built by the King of Bhutan as a dedication to Lord Buddha. Clay carvings are seen on the interior walls of the monastery that depict different aspects of the Buddhist culture. 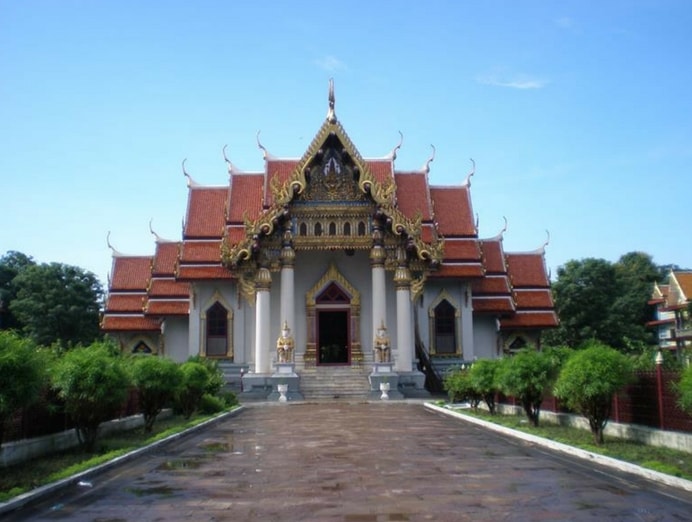 Well known for its curved roof covered with exquisite tiles of gold, the Thai Monastery houses a bronze statue of Buddha and another recently erected 25m high statue in the garden. With a beautiful pond, marvellous architecture and peaceful aura-Thai Monastery demands to be visited at least once by everyone. 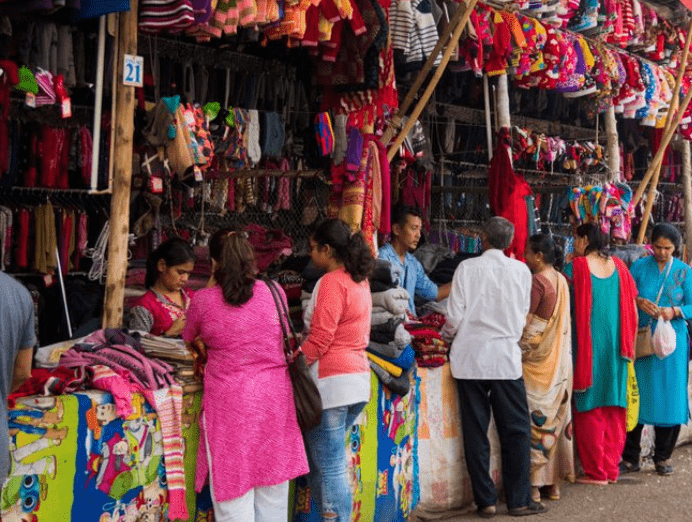 This market is a paradise for shopping lovers. It offers a large variety of winter-wears, handicrafts and souvenirs, etc. The sellers are predominantly Tibetan refugees. 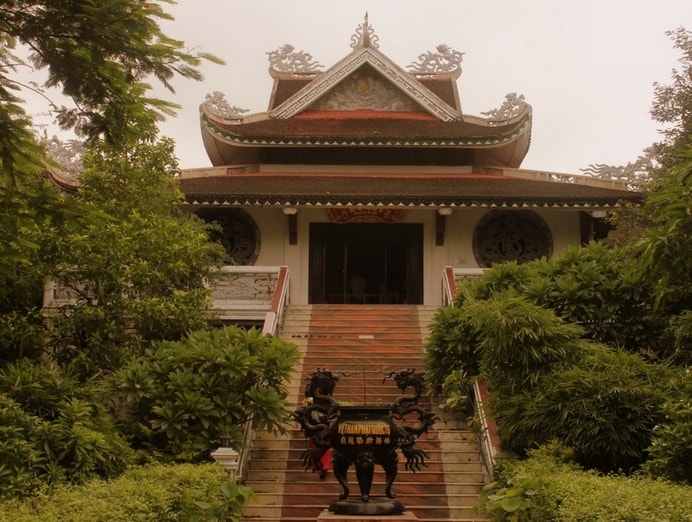 Vietnamese Temple is the most recently constructed shrine in the area and features a serene-looking statue of Buddha which exudes a calming aura and appears to be smiling. The treehouse design of the main entrance area and a beautiful aquarium captivates the beholder. 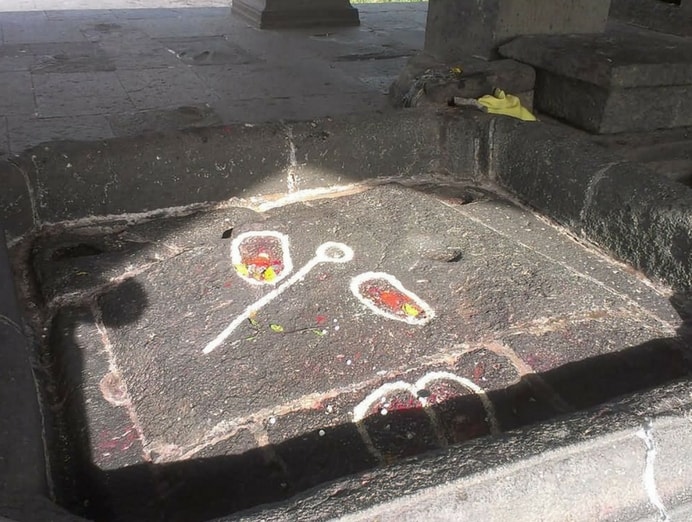 As the name suggests, this temple was built as a dedication to Lord Vishnu and features a 40 cm long footprint of Lord Vishnu that is enclosed by a basin made of silver plates. Located on the banks of River Falgu, this site is highly held among Hindus with the belief that, the footprint truly belongs to Lord Vishnu.

Bihari cuisine spreads a little beyond Bihar to Jharkhand, Eastern Uttar Pradesh, Bangladesh, Nepal, Mauritius, Fiji, some cities of Pakistan, Guyana, and Trinidad and Tobago as these are the places where one can find a number of people from Bihar. Bihari cuisine is predominantly vegetarian because the traditional Bihar society, influenced by Buddhist and Hindu values of non-violence, did not consume eggs, chicken, fish, and other animal products. However there is a tradition of meat-eating, and fish dishes are especially common due to the number of rivers in Bihar, such as the Sone, Gandak, and Ganges. There are also numerous Bihari meat dishes, with chicken and mutton being the most common. Common dairy foods including yogurt known as Dahi as well as buttermilk are known as mattha. Also, Ghee, lassi and butter are popular. While Litti, Malpua, Sattu Paratha, Gol Gappa, Motichoor ke ladoo, Pakoda, and a few more are the dishes with which Bihar’s Cuisine is identified by the outside world.

What to Eat in Bodh Gaya

Bodh Gaya, being a religious center does not offer a lot of options when it comes to non-vegetarian food or alcohol. However, the town sustains quite a variety from Tibetan dishes, Italian dishes including pastas and pizzas, Thai cuisine, Korean cuisine to traditional Bihari Cuisine. Gaya is also famous for its sweets and is the place of origin for a number of them. The main sweets here are Enursa, Tilkut, Khaja, Lai, and Kesar peda all of which are exclusive to Bihar. Other Bihari dishes like Sattu ka roti, Litti-chokha, Pua, Marua ki roti, Chana Bhuja, Aaloo Kachalu etc. are also easily available here.