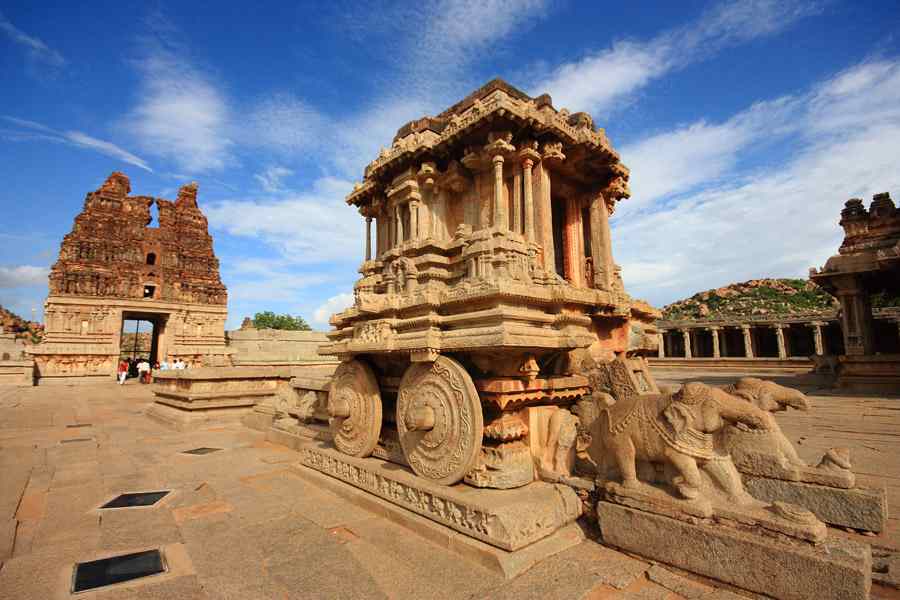 Achyutraya TempleThis temple is also known as the Tiruvengalanatha Temple, after the main deity, a form of Lord Shiva.

Archaeological MuseumA government museum in the area houses a number of artifacts, remains, and other exhibits found during excavation.

Big ShivlingaCarved out of a single boulder, this Shivlinga stands at a height 3m amidst water. It is a major attraction in Hampi.

Daroji Bear SanctuaryEstablished in 1994, this sanctuary was converted from a thorny forest to a lush green area which is now inhabited by Sloth Bears.

Hanuman TempleAtop the Anjenaya Hill, this temple is dedicated to Hanumana. 570 steps must be climbed by devotees to visit this temple. The view from atop the hillock beside this temple is a feast for the eyes.

Hazara Rama TempleAt the middle of the Royal Centre, this was a place of worship for the royals. The walls and pillars are beautifully adorned with fascinating carvings, including the outside walls of the compound. This temple is smaller in size compared to the others in Hampi.

Hemakuta Hill Temple ComplexThe Hemakunta Hill houses a temple complex, many of them dedicated to Lord Shiva. These are all protected by a fort, providing a secluded atmosphere.

Lakshmi Narasimha TempleThis temple features the biggest effigy in Hampi, of Narasimha sitting on SeshaNaag i.e. the seven headed snake acting as a shelter to him. The idol of Goddess Lakshmi is placed along with that of Narasimha.

Lotus PalaceClose to the Zenana Enclosure, is a monument that stands out in its design and style from most of the structures of Hampi. Another complex, for royal women, this one gets its name from the lotus-like dome

Mahanavami DibbaThis structure served as a focal point from where the Vijayanagara kings ruled their Kingdom. Various aspects of courtly life are depicted on this huge structure, including a gem studded throne.

Matanga HillThis hill is described as the location of the hermiatge of the Saint Matanga during the Ramayana, hence is appropriately named.

Monolith BullThe ride of Lord Shiva, the bull is represented here as a sculpture placed on a high platform. It is partially ruined, but is a major attraction owing to its huge size.

Old PalaceThe Old Palace, surrounded by a fort, and is in ruins as of today. It is located in Anegondi, for which kingdom this palace served as the center.

Queen’s BathA part of the Royal Enclosure, this aquatic enclosure was the Royal bath during the times of the Vijayanagra Empire. It was built in such a way that no outsiders could enter the bath, and has lost much to ruins at the date.

Rock climbingHampi is always full of rock climbers who are climbing up the boulders with their crash pads around. The landscape is ideal for rock climbing and bouldering since there are granite craigs and boulders all around. Bolting is limited, so carry a crash pad along.

Virupaksha TempleAlso known as the Pampapathi temple, it is the most famous temple in Hampi and dates back to the 7th century.

Vithala TempleThe most impressive structure in Hampi, the Vithala Temple dates back to the 16th century and is a truly splendid example of rich architecture.

Karnataka – Special cuisineKarnataka’s state cuisine has one of the oldest surviving cuisine of the Kanada culture. Primarily, consisting of rice, pulses and Rotis made of wheat/Jowar along with rich, spiced curries. Karnataka’s cuisine also borrows some elements from its neighboring states of Tamil Nadu, Kerala and Maharashtra. It is rich in both vegetarian and non-vegetarian dishes.Some of it typically includes Idli-Vada sambhar, Vangi bath, Akki roti, Bisi Bele bath Udupi cuisine of Udupi and Mysore is one of the most famous cuisines here that has seeped into other the cultures in and around Karnataka. The famous Masala Dosas and variety of idlis, Rava Dosas and Medu Vada all are part of the Udupi cuisine famous in the state. Sambhar and riceFor the sweet tooth, Mysore Pak, Dharwad’s peda, Holige and Sajjige are some mouth-watering sweet dishes.

What to Eat in Hampi : Local Food and CuisineTypical South-Indian platters are popular in the town with essentials such as Dosa, Vada, Idli, Rasam, Sambhar and more. Other than this Hampi has a flattering variety of cuisines. The town also has a certain western influence over its menu, which lists down items like Pancakes, Pies, Pasta, FalPasta, Falafel, Salads etc . Also find a number of options for Indian, Continental, Tibetan, Italian, Chinese and Mediterranean cuisines here.You might also find the state’s local cuisine such as Vangi bath, Akki roti, Bisi Bele bath, Mysore Pak, Dharwad’s peda, Holige and Sajjige, Raagi Mudde and Jolada Roti .