Udaipur at a glance:

Udaipur, formerly the capital of the Mewar Kingdom. Known as the “city of lakes and palaces” with azure water lakes and hemmed in by lush green hills of Aravallis attracts huge tourists worldwide.

How to Reach Udaipur:

By Air: Domestic airport is at a distance of 22km away from the center of the city. Jaipur international airport connects a few international destinations like Kuala Lumpur, Dubai, Muscat, and Bangkok.

By Rail: Frequent trains running from Delhi, Jaipur, and Mumbai. Local trains run across the city limits and across all the major cities of Rajasthan. Luxury trains are also available in Udaipur if you wish to scale Udaipur in a luxurious manner.

Places to visit and Things to do in Udaipur 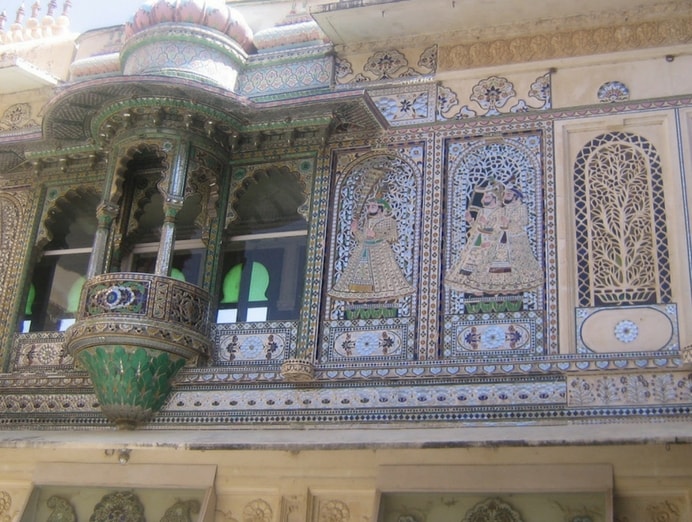 Dating back to the 17th century, Bada Mahal is an incredible structural marvel. Constructed in Rajput-Mughal architectural style, the Mahal is considered as the Men’s section of the City Palace. With lush lawns, well-manicured garden, huge rooms with delicate carvings and painted mirrors on walls, strong pillars, continuous courtyards, charming balconies, and striking fountains add to the beauty of this palace. 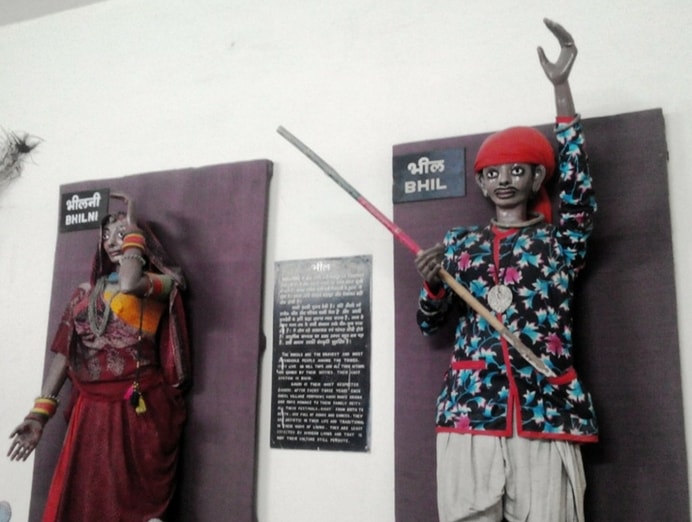 If you are interested in artifacts and curious to the know-how of making these items then Bhartiya Lok Kala Museum is definitely the place for you. Located to the north of Chetak Circle in Udaipur, the museum has a fine collection of paintings, folk musical instruments, folk dresses, and ornaments, dolls, masks, puppets and idols of Gods and Goddesses. 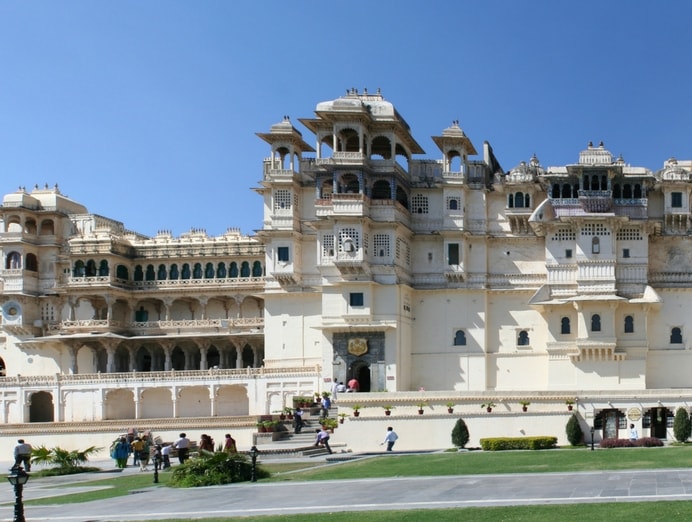 The beautiful and majestic City Palace towers over the Pichola Lake is a mix of a rich blend of Rajasthani, Mughal, Medieval, European and Chinese Architecture each blending beautifully with the other. 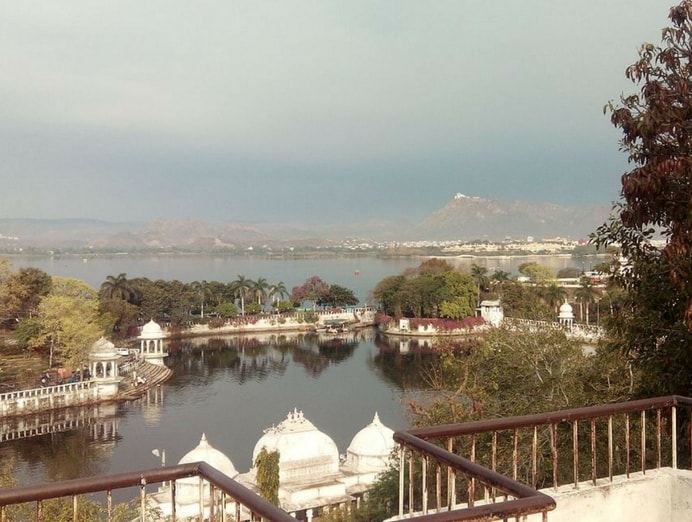 Doodh Talai Musical garden is a rock and fountain garden which is a great place to enjoy the sunset and one can see the wide expanse of the city. Also, there is an Areal tramway (cable car) connecting a garden of Doodh Talai and the Karni Mata Temple. 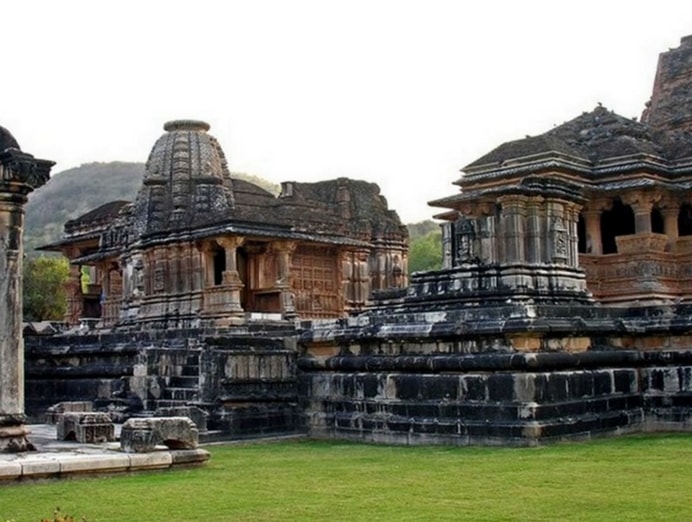 Almost 22 km away from Udaipur, Eklingji Temple is dedicated to Lord Shiva. Taking a cab to this temple is the most convenient way to reach it. It is one of the most famous temples of Rajasthan, also known for its remarkable architecture. 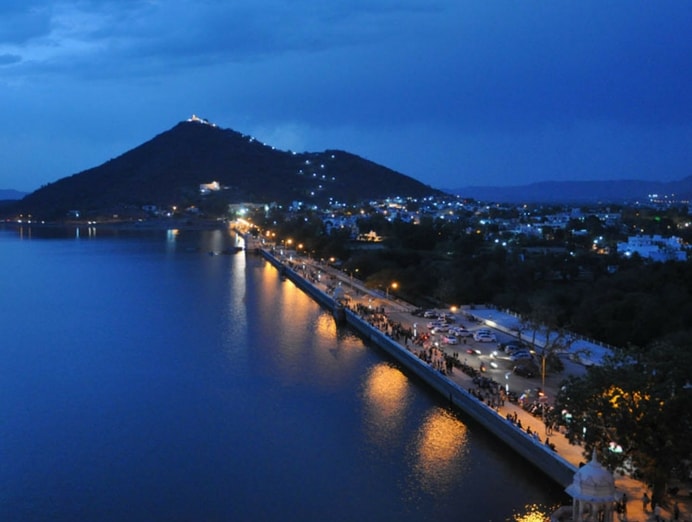 This Lake is a man-made lake with islands in between. One of these islands is a public park and has a beautiful fountain, while another is used as a Solar Observatory. Every year the Hariyali Amavasya Festival is held during August-September at the lake precincts. 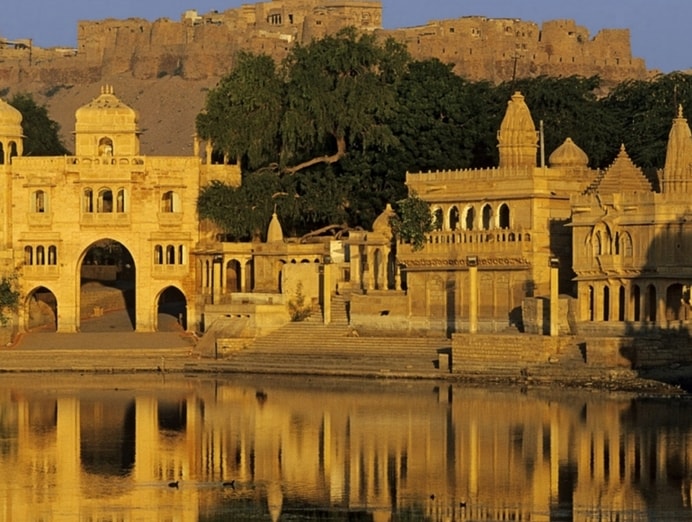 For a fulfilled and enriched trip, you must visit Gulab Bagh and Zoo which is not merely a garden but a paradise for those who wish to experience more in less time. 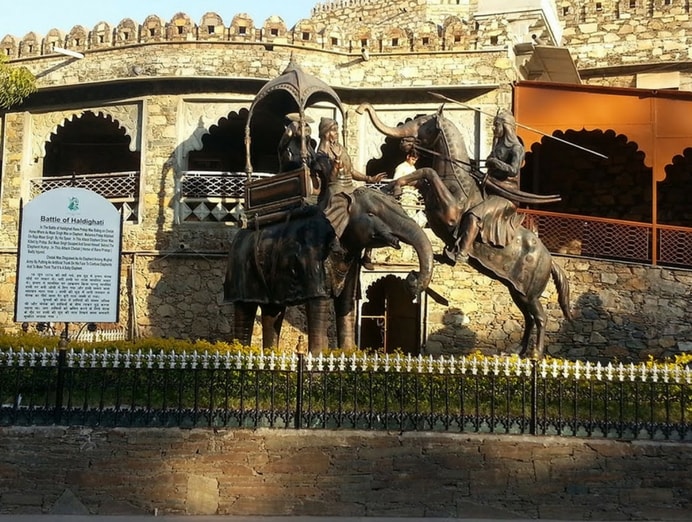 This is a historic site located 40 km from the Udaipur city and is famous for the battle between the Mughals and the Rajputs led by Maharana Pratap. There is a cenotaph with thin, delicate marble columns dedicated to Rana Pratap’s horse. 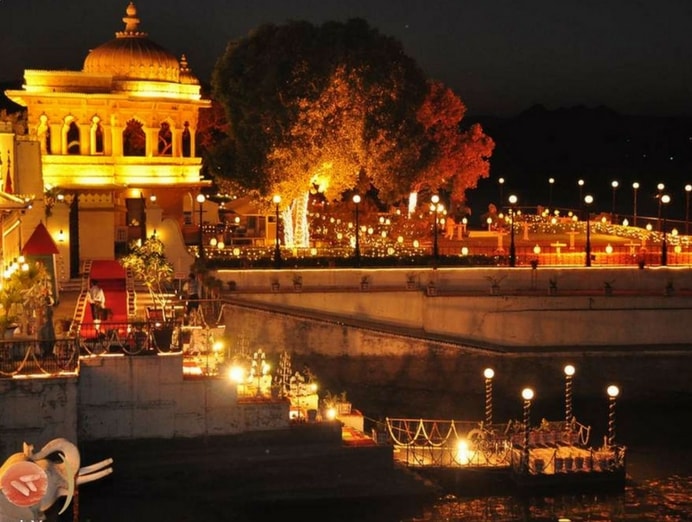 An exquisite palace placed in an estuary Island in Pichola Lake, Jag Mandir Palace offer a blissful view of the sunset and the spacious courtyard with black and white marble tiles Is a striking feature of this architectural marvel. 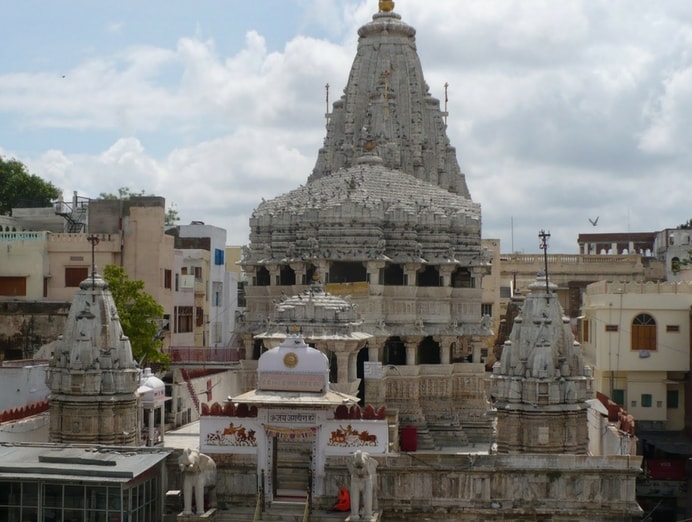 Located in the City Palace complex of Udaipur, Jagdish Temple is dedicated to Lord Vishnu (Laxmi Narayan), the preserver of the Universe. Made in the Indo-Aryan style of architecture, this temple is one of the most famous and the largest temple in the city of Udaipur sited at a distance of 150 meters from the Bara Pol of the City Palace. 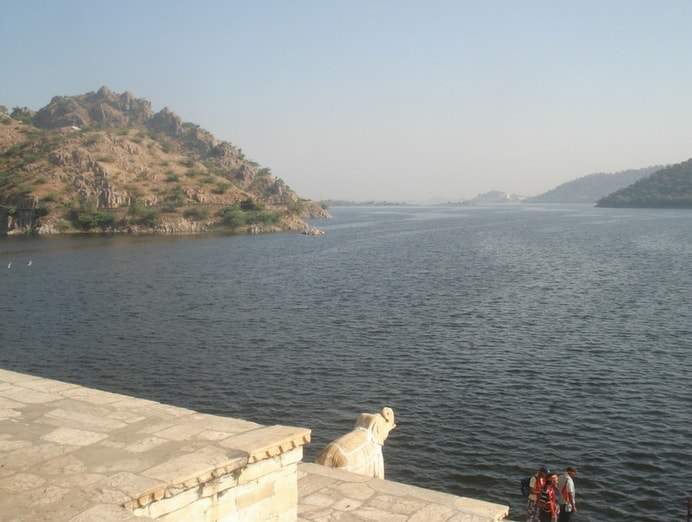 Jaisamand Lake is the second-largest artificial lake in Asia. There are seven islands in the lake, one of which is still inhabited by a local tribe, also it has a temple dedicated to Lord Shiva on the dam. 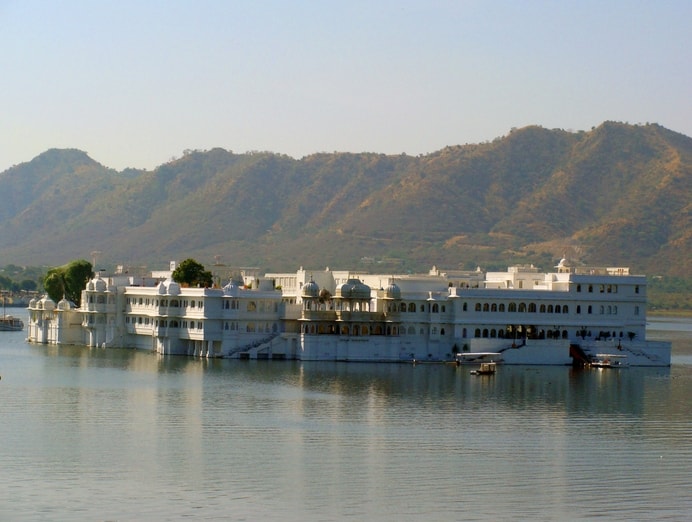 The oldest and one of the largest lakes of Udaipur, Lake Pichola is enveloped by lofty Palaces, temples, bathing ghats and elevated hills on all its sides. It is one of the most beautiful sights of Udaipur. 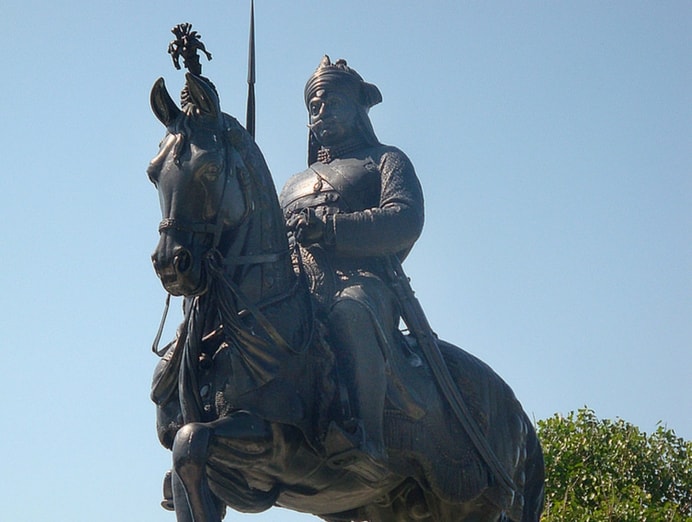 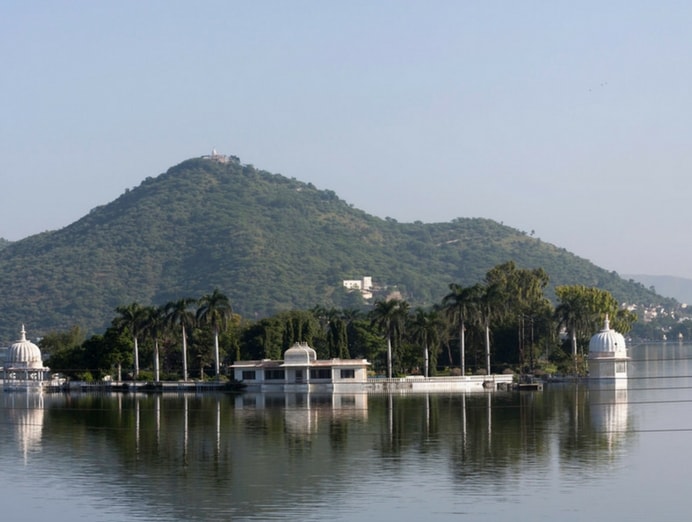 Constructed in an Island at the heart of Fateh Sagar Lake, Nehru Garden encloses many distinct water fountains resembling those in Brindavan Gardens of Mysore. Another major attraction of the garden is a floating restaurant, in a boat shape. 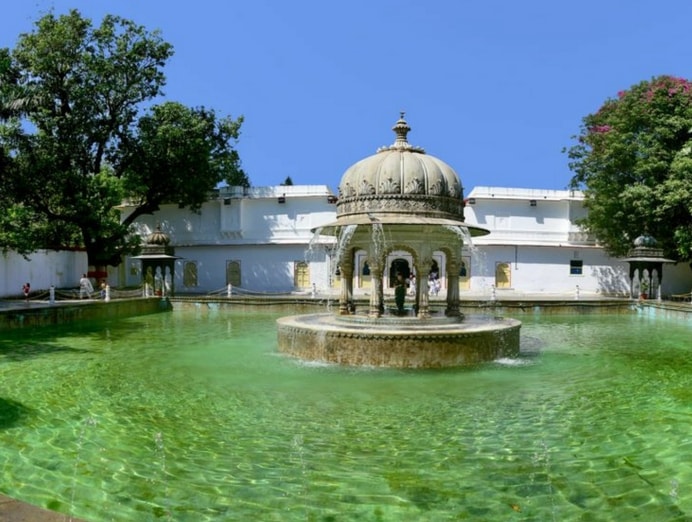 A majestic garden located in one of the shores of Fateh Sagar Lake, Saheliyon-ki-Bari has expensive lawns, shady cool walking lanes and imposing fountains. It is one of the best places in Udaipur to relax. 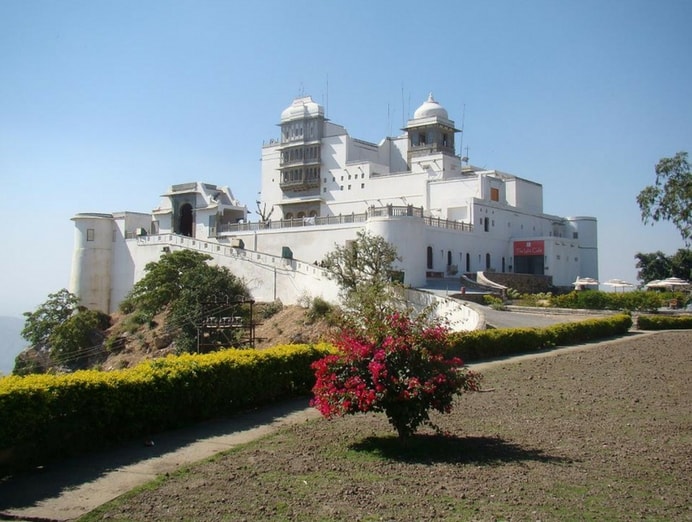 Also known as Monsoon Palace, Sajjangarh Palace is located at a peak Bandera Mountain as high as about 944 m above the sea level overlooking the famous Pichola Lake. This palace adds to the architectural beauty and grandeur of the city. 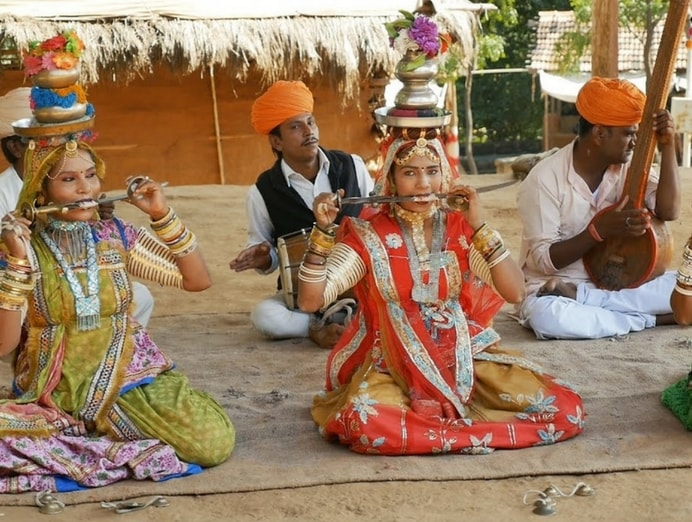 Located at the foothills of Aravali Mountains in Udaipur, Shilpgram is a craftsmen’s village which encloses twenty-six huts constructed in traditional architectural styles and these huts display many household decorative articles. 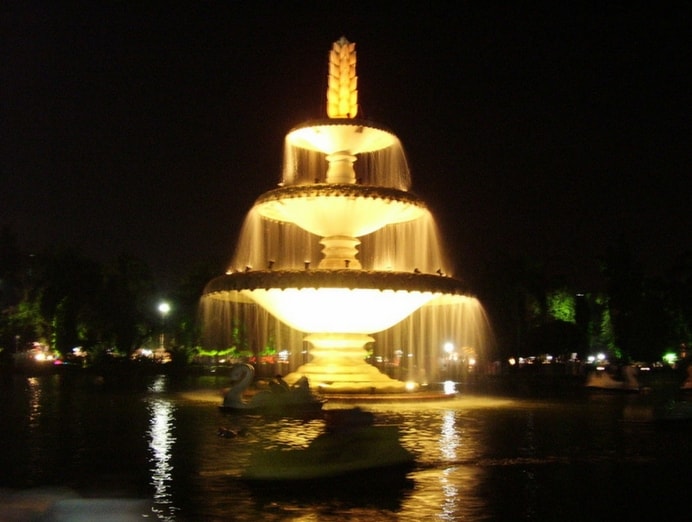 Sukhadia Circle, also called The Heart Of Panchvati, is located in the north of the Udaipur city. This splendid turn around Panchwati is a small pond amidst which lies a 21 Ft high three-tiered fountain. 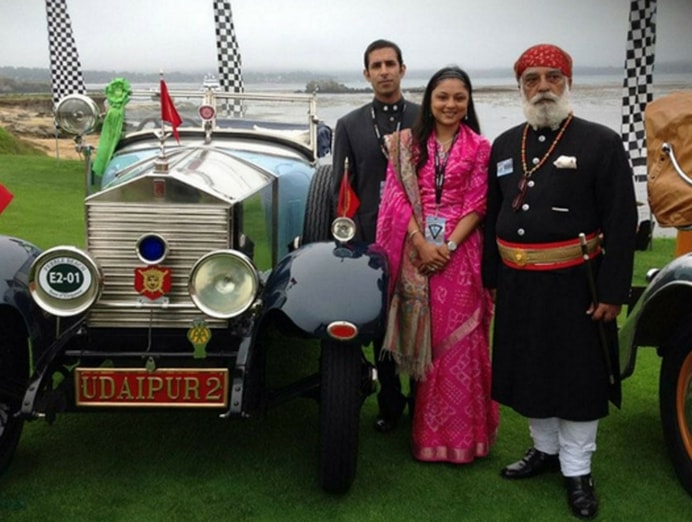 Located just a few kilometers away from the magnificent City Palace Vintage Car Museum is an awesome place for automobile and car lovers. The museum showcases a collection of spectacular vintage cars like Cadillac, Chevrolet and Morris, of a bygone era which was once possessed and used by Maharanas of Udaipur.

What to Eat in Udaipur :

Rajasthan is much of what its culture is and the culture here derives a lot of its color, festivity, significance and of course, spice, often literally from the diverse and exquisite cuisine here. The cuisine of Rajasthan is primarily vegetarian and offers a fabulous variety of mouthwatering dishes. The food here is such that it is suitable for the weather, availability of water, and other environmental factors of the area. The delicacies of the state are truly some of the richest, unique and most loved preparations of India. Names such as Dal Bati Churma, Moong Dal ka Halwa, Ghevar, Rabdi and numerous more are popular all across, especially in North India, with their popularity spreading beyond the confines of the state, while your visit to Rajasthan is only complete with a splendid and authentic Rajasthani thali.

Udaipur is where much of Rajasthan’s grandeur resides, traces of which can be seen in the rich cuisine available here. One can just not miss out the famous Dal Bati Churma or Gatte ki Sabzi. Also, do try out the famous Dal Kachori, Mirchi kachori, Kachori Chaat and other kinds of kachoris from the sm the streets, forming a popular element of Udaipur’s Cuisine. Order a Rajasthani Thali, which has all the best local items to relish in the area from Dals, Roti, vegetables to delicious sweets.