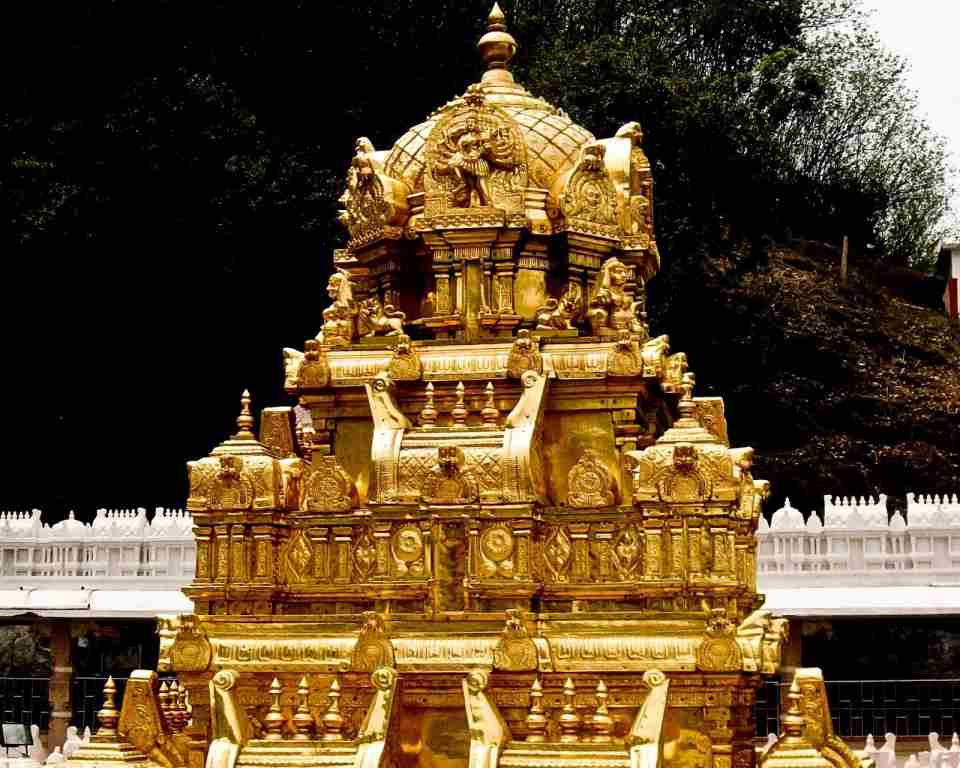 Vijayawada at a glance

How to reach Vijayawada:

Things to do in Vijayawada

The hills around Vijayawada, in the state of Andhra Pradesh, are very rich in rock-cut architecture. The most magnificent and largest among them are the Undavalli Caves. These caves with amazing engineering were built in the 7th-8th century AD. The caves are four floors in height; these rock temples have numerous sculptures and murals.

The Kanaka Durga Temple is a world famous Hindu temple of the Goddess Durga in Vijayawada in Andhra Pradesh State. It is located on the Indrakeeladri hill which is on the banks of the Krishna River. The temple has an important place in the Hindu scriptures as many of the Siva-leelas and Shakti-mahimas take place on or around it, making the temple a place of great spiritual significance and attracting pilgrims and tourists in huge numbers every year.

Places to visit in Vijayawada 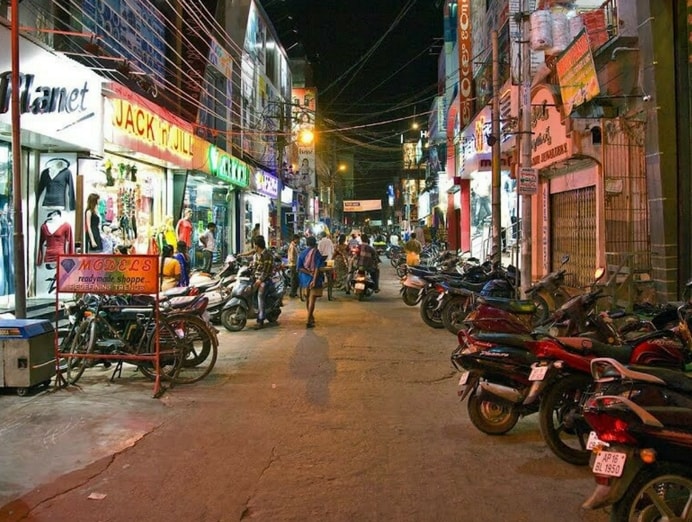 The busiest trade centers of the city, bustling with activity and trade, Besant Road is a dynamic place in Vijayawada. The road has grown into a pivot of commercial hustle in recent times. 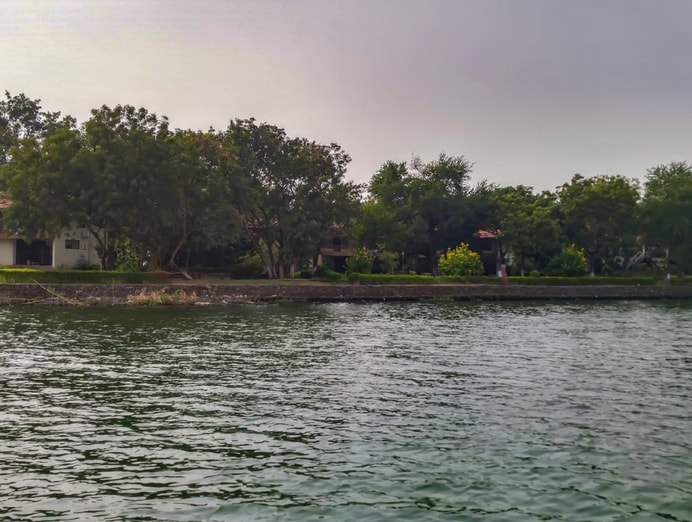 The largest island in the Krishna River, the Bhavani island is a favorite of all its visitors and home to numerous activities, to give you an ideal holiday experience. 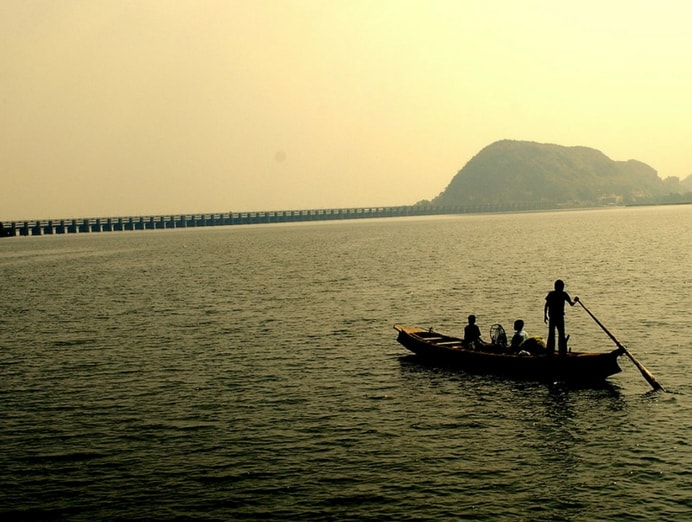 The Gandhi Stupa, as it is better known, is a very famous tourist spot in Vijayawada that has been attracting hordes of tourists mainly due to a planetarium and the Light and Sound show depicting the life and teachings of Mahatma Gandhi. 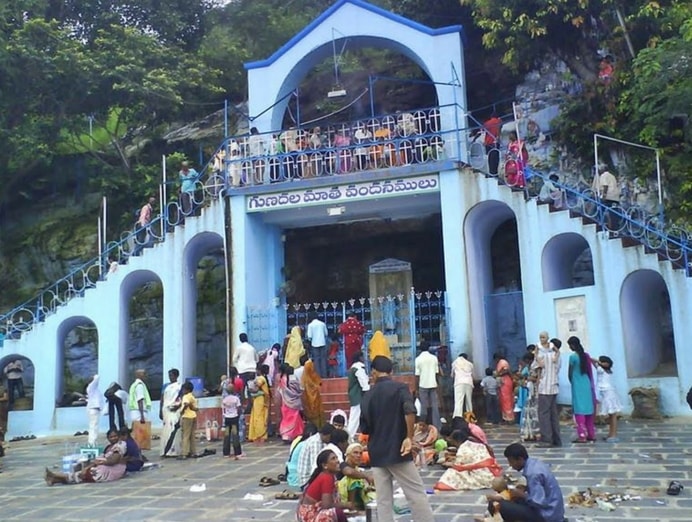 Somewhere amongst the hills of Krishna District, is the St Mary’s Church. One finds here an iron cross, erected on the top of a hill, and a museum housing holy relics. Also, the area is a centre of much festivity and devotion when it hosts the Annual Feast of Our Lady of Lourdes. 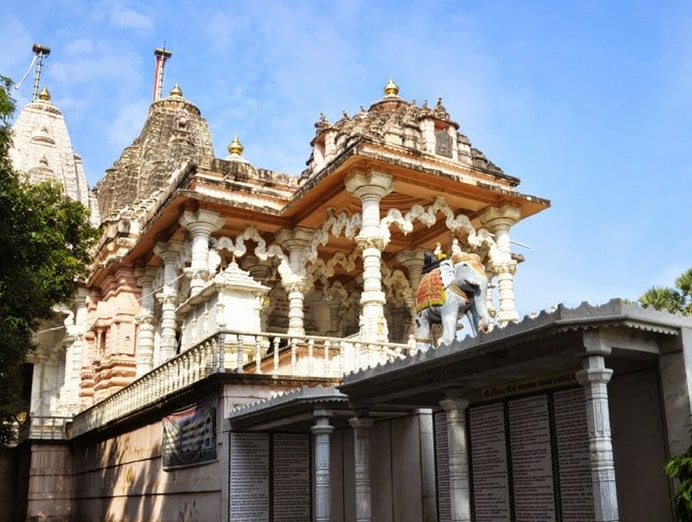 One of the most renowned Jain temples, this structure houses he only Jain Shrine in the area. Adorned with Jain style of architecture, this is also one of the most beautiful structures n town. 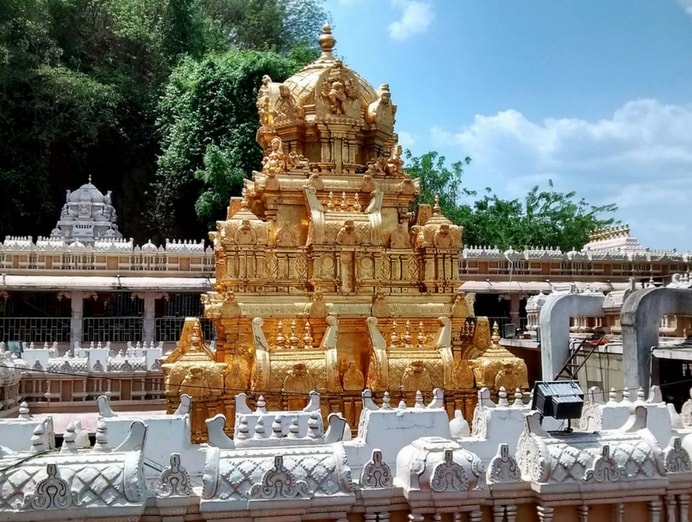 Kanaka Durga temple overlooking Vijayawada, was constructed by the stupendous warrior of the epic Mahabharata, Arjuna, according to the legends, encloses a enchanting and delightfully massive 4 ft high idol of Durga in a standing position overcoming the demon Mahishasura by piercing him with her trident. 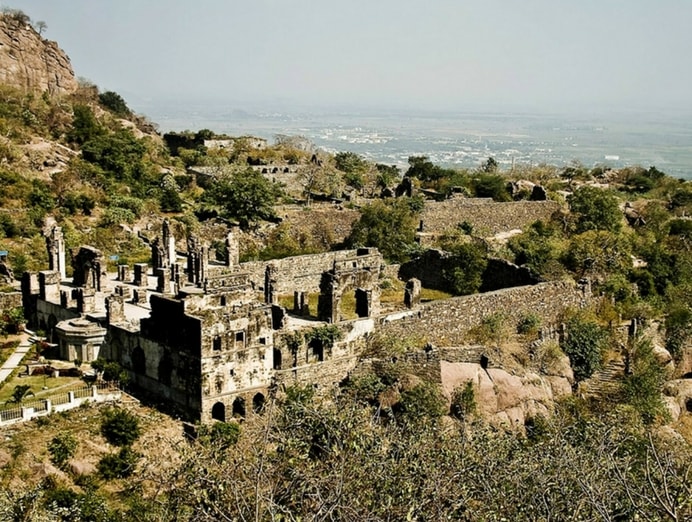 A fort with roots in parallel histories, this one is said to have been built as a center of recreation, business and trade. The main entrance gate, carved out of a single boulder of granite is called the Dargah Darwaja. 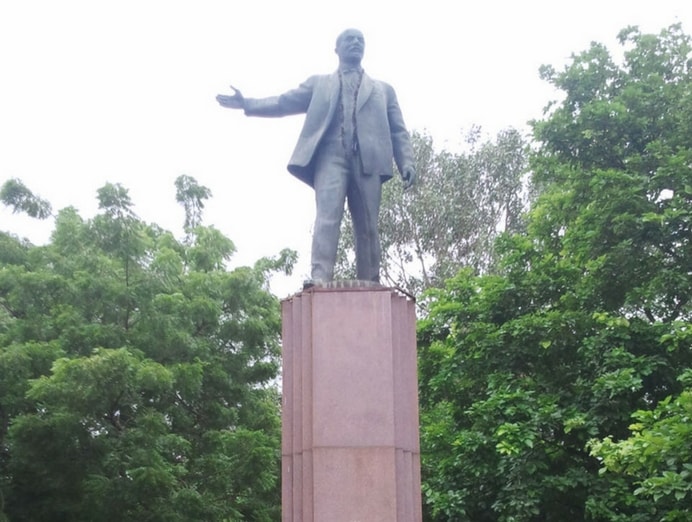 An instance of communism, its ideologies and concepts, take shape of a massive and sprawling statue at Vijayawada. Since the town was under communists for some time in history, during the 1980s, one also finds a statue of Karl Marx in the city. 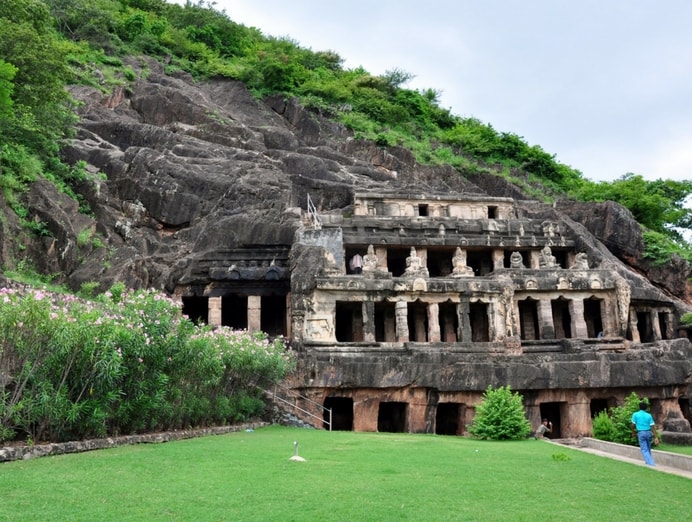 These are ancient caves, dating back to 5th century and one of the most significant landmarks of the heritage of Vijayawada. Though a lot has been lost to ruins, the caves still hold religious and spiritual value as they house idols of Lord Nataraja and Lord Vinayaka amongst many more, a few cave temples and a shrine for Goddess Durga. 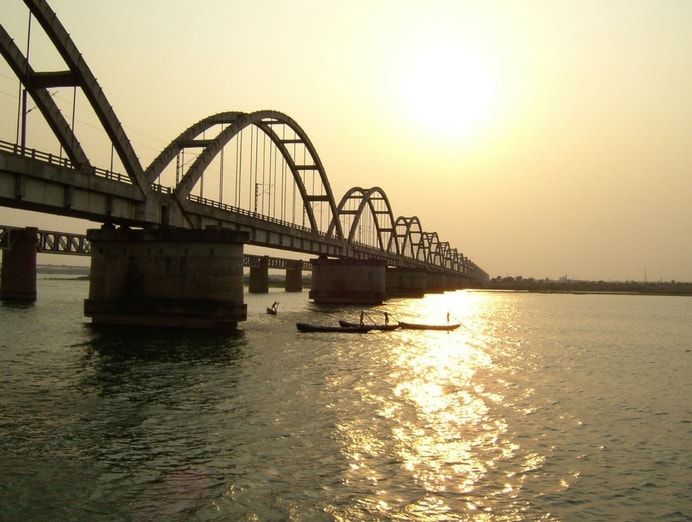 At a distance of 150 km from Vijayawada, Rajahmundry holds many ritual places of visit including Draksharama, Kotipalli, Samalkot, Pattiseema the famous Siva temples. 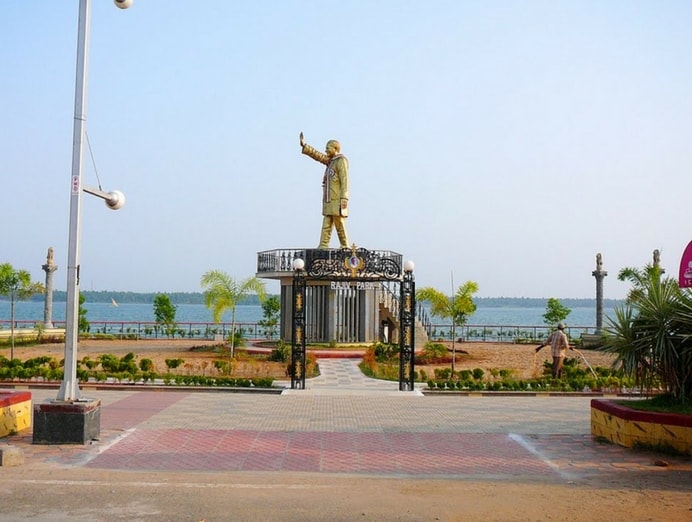 A well-maintained park, brimming with lush greenery, thick grass and flowers all around, the Rajiv Gandhi Park is ideal for spending some relaxed and idle time in the city. To keep you enchanted the park also hosts a musical show and a mini zoo. 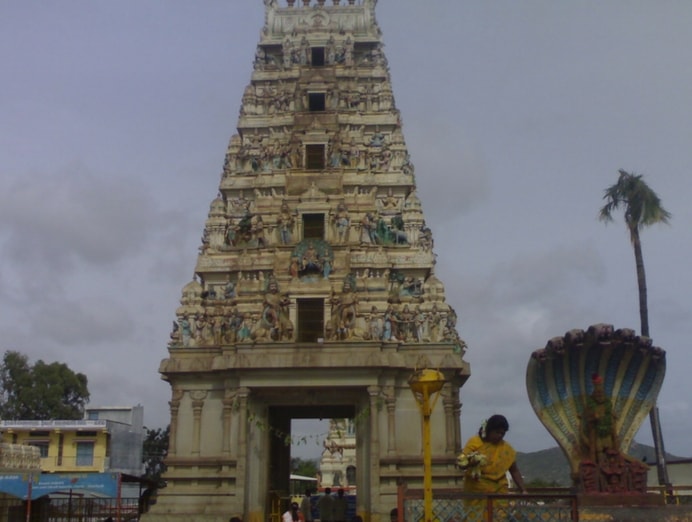 Located in the Indrakeeladri cliff, Subramanya Swami Temple surmounts the city of Vijayawada and the River Krishna, and is one of the most admirable temples in Vijayawada. 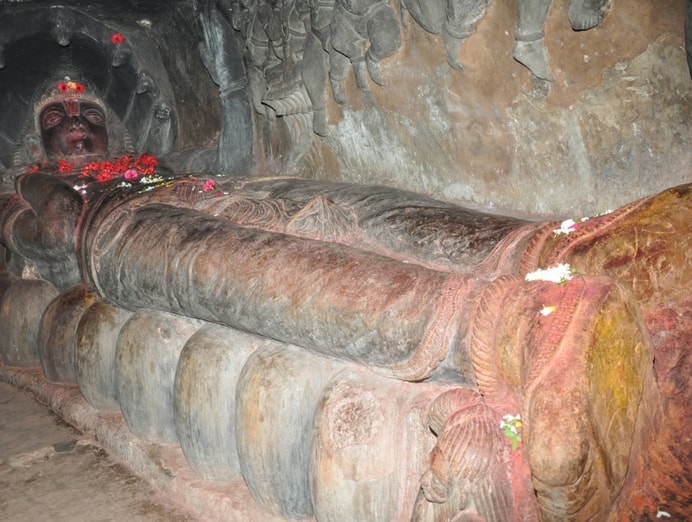 Elaborate caves, form the 7th century, the Undavalli Caves are 4-stories high and hold a majestic and sprawling statue of Lord Shiva, carved out of a single piece of granite. A museum of the Archaeology Department, this is a walk through imprints of time and all it left behind. Browse through a rich and ancient collection of sculptures, idols, inscriptions, paintings, cutlery and weapons.

What to Eat in Vijayawada :

From the very popular Hyderabadi Biryani to authentic Andhra food to even multi-cuisine dishes, Vijayawada offers to its people and visitors hygienic and flattering food. Indulge in non-vegetarian delicacies with rich, and tangy Mughal flavors or order a vegetarian thali for all the best things of Andhra’s cuisine in one platter.Do not miss local items like Laskora Undalu or Raskora Undalu (coconut laddu), Sunnundallu – Laddu made from with roasted Urad Dal (Minapappu) and Jaggery (Bellam), Nellore Chicken Biriyani, Pachadi – typically made of vegetables, greens and roasted green or red chilies, Pappu Koora (Lentil based dish) boiled vegetables stir-fried with a small amount of half-cooked lentils (dal) and more.