Vrindavan at a glance:

Known as Holy town in north-India is home for many temples. It is believed in the Hindu mythology that the Hindu deity Krishna is said to have spent his childhood here many of the temples dedicated to Krishna and his lover, the deity Radha.

How to Reach Vrindavan:

By Air:  Vrindavan is very well connected with all the domestic airports. Foreigners coming to visit Vrindavan must come via Indira Gandhi International Airport at Delhi.

By Road: For every half, an hour one may find a bus heading to Mathura. One can hire a cab as well to explore Vrindavan.

Places to visit and Things to do in Vrindavan

Banke Bihari Mandir is one of the most important temples of Lord Krishna and you just cannot miss the spirituality in the devotees that throng the temple every day.

Dedicated to Lord Shiva, this temple depicts the lord in the form of a gopi. This has been derived from a tale where he took the shape of a female to see the Rasa dance. 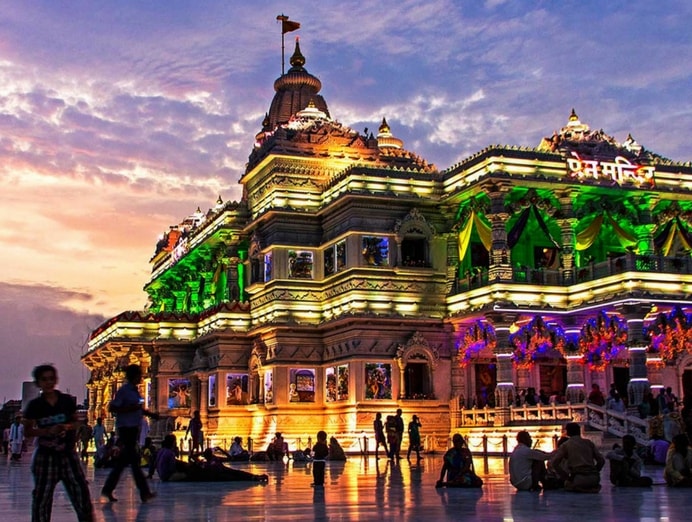 Prem Mandir is a newly constructed temple and is the most beautiful in the Brij area, talking about the architecture. Made out of white marble, it is adorned with very intricate carvings on the walls. 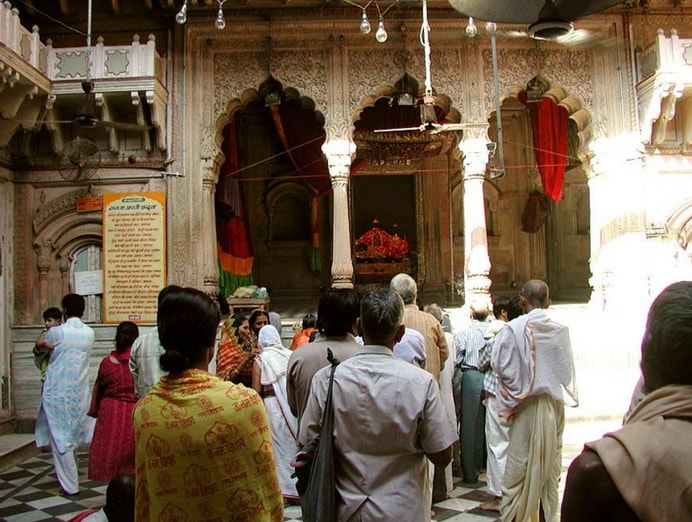 Built by Gopala Bhatta Gosvami, this temple was established in 1542. It is said that the deity here is self-manifested from one of the scalogram-shilas. As an idol of Radha is not present here, a crown placed near Lord Krishna depicts her.

The Shahji temple was built in the year 1876 by Shah Kundan Lal and is dedicated to Lord Krishna. The main deity here is known as Chhote Radha Raman.

What to Eat in Vrindavan :

The food in Varanasi is only pure vegetarian and often even without any onion or garlic. However the city’s platter has many flavours, colour and richness to lose oneself in. A typical platter here is incomplete without Aloo-Puri, Pakoras and Lassi. The town also houses quietly a variety from traditional snacks and delicacies on the street to global cuisines with the finest cheesecakes, salads and lasagna. The other relishes of the town that you must try, include Hing ki Kachori, Kachori-Sabzi, Chana- Bhatura, Chhole-Poori as well as sweets such as Pedhe, Laddos, Rabri, Jalebi, Kheer, Kalakand, Khurchan, Balushai and many more.